Warning: Declaration of UTCW::widget(array $args, array $instance) should be compatible with WP_Widget::widget($args, $instance) in /nfs/c08/h04/mnt/125740/domains/mulysa.org/html/blog/wp-content/plugins/ultimate-tag-cloud-widget/utcw-widget.php on line 0

Warning: Declaration of UTCW::form(array $instance) should be compatible with WP_Widget::form($instance) in /nfs/c08/h04/mnt/125740/domains/mulysa.org/html/blog/wp-content/plugins/ultimate-tag-cloud-widget/utcw-widget.php on line 0
 The Year | mulysa.org
Skip to content

As the year draws to a close I’ve been looking back at year three in the garden. It was epic in a few ways and very challenging in others. Here is a random list of reflections.

Established perennials and shrubs are easier – Having a few seasons under their belts gave plants a lot more drought resistance. Things are starting to fill out and look prettier, while shading the soil more which prevents weeds and saves on watering. Some things, like the bamboo, have started to create screening and lushness.

The long, cool spring produced amazing greens – While harvesting 10 pounds of greens a week is certainly a boon, I was so disgusted by them due to morning sickness for several months that I sold or gave away most of them. Sometimes I didn’t even want to look out the window at them.

Our major remodel disrupted gardening – Half the eco-lawn turned into a construction site and other areas were used for staging. The herb garden, black raspberries and some other plants had to be moved. Five months of demo work and contractors coming and going made it hard to conduct regular garden maintenance. But we have a really sweet kitchen now.

The English greenhouse varieties didn’t necessarily do better than the regular short season salad tomatoes like ‘Early Girl’ and ‘Stupice’. The cherry varieties all did well, especially ‘Sungold’ and ‘Cherrola’. The two tomatoes that did not perform as expected were ‘Striped Roman’ which had terrible blossom end rot even with lime and consistent watering (through it was the favorite of some of my friends this year) and ‘Vilma’ which was the earliest producer (NOT 95 days, more like 50) and it didn’t produce that heavily either in the garden or greenhouse. It was an extremely dwarf bush type that was indeed determinate. It would be a good choice for a patio pot for someone with really limited space.  The fruits were tasty, rather typical, large red cherry tomatoes.

Because the greenhouse got so hot I left the doors and windows propped open day and night during the warm months. So I lost some fruit to a nighttime visitor known as the ‘phantom pooper’. We also spotted him high up in the plum tree late one night. We heard noisy munching outside our bedroom window and shined a flashlight out there to see a little opossum chewing with its mouth open.

Beneficial insects rock – The wasps in the attic, the bumblebees under the garage foundation, the neighbors’ honeybees and all the other critters who worked on pest control deserve a shout out. This year I felt like the garden was much more of a functional ecosystem that had self-balancing capabilities. The plants that attracted a lot of micro-wasps and predators played a huge role, especially the giant angelica and the other carrot family plants that were left to flower like parsley and cilantro.

Perennial edibles are great – Oh, I have all these berries, fruits, herbs and rhubarb to eat and I did hardy any work for them? Why am I slaving over so many annual vegetables?

Gardening with a huge baby belly is difficult – Bending over became impossible as the summer progressed and while there was a brief interlude between nausea and heartburn, pregnancy made it hard to keep up with the basic tasks. I became so slow and tired and needed to wait for help to lift things. Next year will be a new adventure with its own challenges I’m sure: gardening with a baby. But at least I’ll be able to be bend and lift. 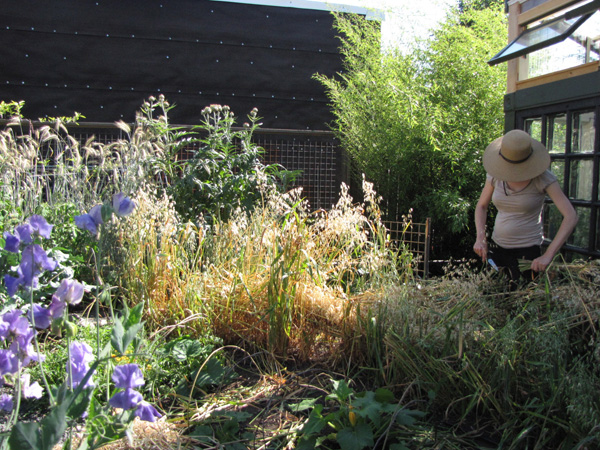 I love my work as a landscape designer and artist. When I'm not planning homesteads or working in the studio, you'll find me hiking, photographing, gardening, baking, cooking vegetarian meals with friends, reading and working on sustainability issues...with my baby on my hip in Portland, Oregon.
View all posts by Mulysa →
This entry was posted in Plant of the Day. Bookmark the permalink.

2 Responses to The Year